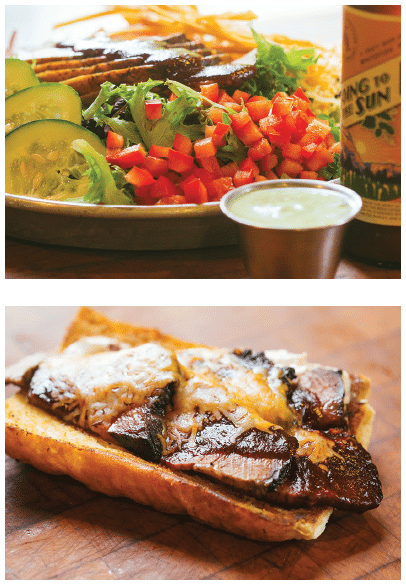 Feeding a community with locally sourced ingredients and a whole lot of love.

You don’t necessarily need to be a native of the Flathead Valley to become a wonderful addition to this community. The owners of Piggyback Barbeque left Texas seven years ago before life became harder than it needed to. Reeves Stanwood was passed over for a job promotion in Houston at a business he had worked at for a long time. Disappointed at the outcome and looking to seek out other possibilities, the family left Houston to come to Whitefish and be closer to his mother and step-dad. With two children young enough to not be overwhelmed by being uprooted, Montana made sense.

Their move proved to be a fabulous choice. The whole family settled in to their new home seamlessly. Christl, Reeves’ wife, decided to go back to school to get her degree in counseling at Great Falls University after they arrived in Whitefish. She followed her path and secured a job as a therapist in the Whitefish school system. Christl is a major supporter of her community. She leads their daughter’s girl scout troop and volunteers in many other activities in the community.

Reeves and Christl’s children, Madison and Riley, have adjusted as well as their mom and dad have. Riley is 14 and is moving towards mastering his experience of becoming an Eagle Scout. (Quite the choice for a teenager who could be doing so many other things!) Maddie is 10 years old and a Girl Scout. She’s learning the guitar and living the life all kids deserve. They all seem to be flourishing in their own ways.

And then, of course, there’s the success they’ve encountered with Piggyback Barbeque. Reeves began his food career at the age of 15 working as a busboy at a restaurant in Houston. That grew into various iterations of kitchen work and corporate restaurant positions. The years of hands-on training in the food business gave Reeves great kitchen skills. (His life skills aren’t bad either!) Reeves bought the original business, also called Piggyback Barbeque, three years ago from the previous owner. He changed the menu to include lots of options so that no one is ever bored with their food choices.

Over the years, the restaurant has garnered a loyal clientele. When you make good food, people show up, and Piggyback BBQ has a menu everybody can appreciate. Plus, the location couldn’t be better. The ambiance is completely inviting. The staff couldn’t be sweeter if they tried. 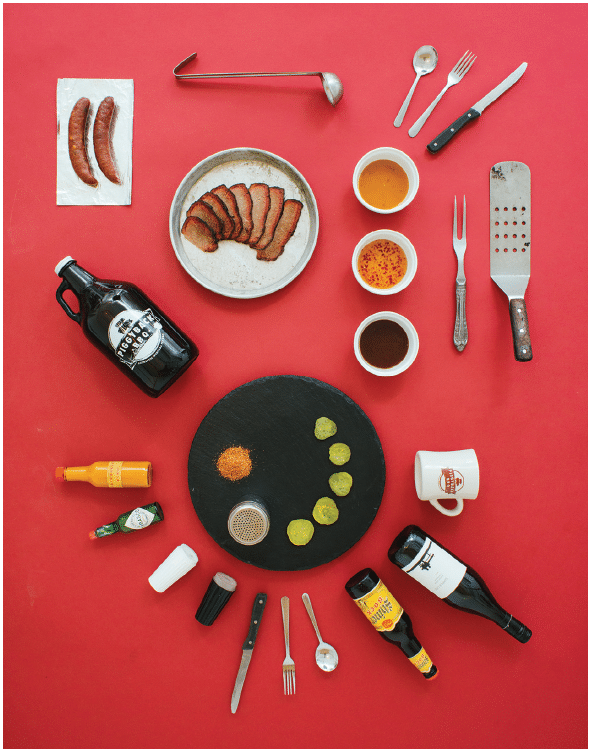 The menu centers around local ingredients. The pickles (fried, no less!) come locally from the Hutterite Community. (I’ll cop to inhaling my share of them!) There’s nothing better than good pickles with the right barbecue. Flathead cherry wood is used in smoking the meat served at Piggyback, essential for the barbecue flavor profile. Flathead cherries are also a key ingredient in the Flathead Cherry barbecue glaze used in many of the dishes on the menu. Yep, that’s right, Flathead cherry barbecue GLAZE! As it turns out, Christl has become somewhat of a cherry connoisseur and makes cherry jam among other good things cherry-fied. Buying locally works best for all of us, and Piggyback has committed to supporting their community through their local ingredients.

The restaurant’s dedication to their community also translates in the many ways that they give back to this area. Donating their time, and even their product, occurs wherever they can make that happen.

In addition to the food that the restaurant puts out, Piggyback’s catering service grows bigger every year. Piggyback has such a significant following that when it comes to finding the right fit for a big local event, they’ve been chosen to feed the crowd many a time. For example, Piggyback BBQ catered the Western Governors Conference 2017 this past summer in Whitefish, feeding 450 people. Not bad for a former busboy, eh? Running the grill at Oktoberfest in Whitefish has become an annual event for Piggyback as well, where they serve up traditional German-style specialties – a delicious departure from their regular BBQ menu.

The catering aspect of Piggyback has garnered a near windfall for this business. Just because your business has a nice local following doesn’t allow you to be complacent – restaurants can never have too much action. Catering can save the day when seasons ebb and flow in the food business and Piggyback BBQ seems to be expanding that part of their repertoire by the minute.

In their brick and mortar, Piggyback serves up their authentic pit BBQ all year long. If it’s chilly out, sit inside the cozy restaurant and order those pickle chips I mentioned to complement any number of sandwiches and salads. If you’re looking for a challenge, enjoy the “True Grit” – Piggyback’s signature sandwich piled with brisket, pulled pork, sausage, bacon, slaw, “Montana sauce,” and cheese (whew!). As the winter months set in, Piggyback’s breakfast hours begin – check their website for times, you really don’t want to miss out. Once the snow melts, Piggyback hosts live music outdoors in their yard full of picnic tables, Tuesday through Saturday every week from the end of June until September.

It can be a challenge to find food that everybody understands when you’re in the business of running a restaurant. Piggyback does a great job of having a multitude of food demands covered, and that’s what Reeves wanted to create. 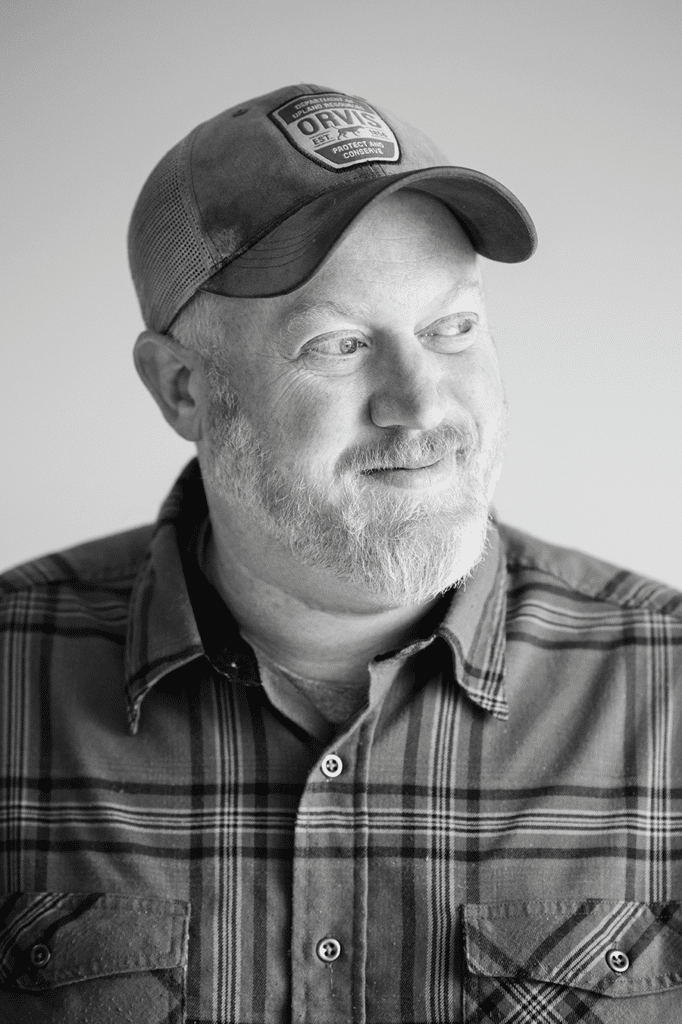 For certain people who become chefs, life learning can be better than culinary school. Being around lots of different kitchen staffs and many culinary styles allows a person to learn, in their own way, to create the process that best suits them. Intuitive learning gives a person a definite spin on what works and what sells. Reeves has figured that one out. His community sensibility brings people back. Whether it’s the music, the food, the people, or all of the above, inclusion is a real force here. You are absolutely welcome when you walk in the door.

Family is a huge focus for the Stanwoods. They participate in many winter sports. Hunting and skiing keep the boredom of short winter days from taking over. They live within walking distance of the restaurant, which makes things easier. Whitefish is home and has the balance this family intended to create when they landed here. Life is good!

Comfort is obvious when spending time with Reeves. He treats his staff as people, not as people who work for him. He is so available in his communication. He is delighted with his life and his family. You can feel that, and it sets him up for success – when you respect others, there’s naturally a payback of support around you. For someone who could have become jaded in the food business, he grew past the tests. It’s clear he loves life and what life has brought to him. That sense of value never goes away.

Piggyback BBQ is way beyond good eats. It’s about family and community. The Flathead Valley is better for it. Visit Piggyback BBQ at 102 Wisconsin Avenue in Whitefish. Find more information at piggybackbbq.com, by calling 406.863.9895, or on their Facebook page.