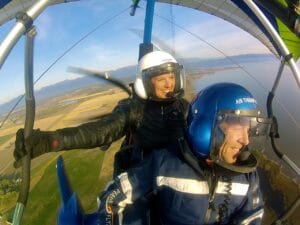 A Flight for Sore Eyes

From 100 feet above ground, Linda Graf saw two red foxes. They were running nearly shoulder-to-shoulder together across a field; one just a pace ahead of the other. Graf watched their tails catch in the wind behind them. They didn’t break stride, and they didn’t notice her and Todd Ware flying just above in Ware’s Apollo “Monsoon,” a 700-pound hang glider-like plane. Ware pushed on the control bar, and they floated past the meadow. He directed the craft north from the Ferndale Airfield, which sits just east of Bigfork. The Swan River came into view.

“To see the wiggles and squiggles from that perspective – it was amazing,” Graf, who is a real estate agent in Bigfork, said. “It felt so surreal, seeing all these places I’d hiked and kayaked from above.”

They cruised on, passing over a flock of white-winged birds and then along the rise of the Swan Mountains, near the Jewel Basin Hiking Area. Graf had called her friends that morning to tell them she would be flying with Air Therapy Aviation, Ware’s business. Her friends lived in the flight path, and they came out to wave as she coasted above.

That June morning had been a difficult one for Graf. “I was going through a transition,” she said. “But when we flew up, everything fell away. Nothing that I was dealing with in my personal life was on my mind at all. Not even for a second.”

What she mostly recalls about that day, she said, is how bright and green Bigfork was, and how the Flathead Valley was bursting into summer. Later that afternoon, she updated her Facebook page with a status about her flight. The serene, wide-open airspace above Lower Valley had become, as she wrote, her “new happy place.”

Ware remembers the foxes, too. He remembers Graf giggling. “She seemed enchanted,” he recalled.

“He’s just so present in the moment,” said Graf, who has flown twice with Ware and plans to do so again this summer. “I have to admit, I have a little fear of heights. But I trusted him. I totally trusted him.”

Years ago, in 1998, Ware had been struggling with a transition of his own. “I was having somewhat of a midlife crisis,” he said. “It was from a bad breakup and I wasn’t recovering. I wanted to do something fun.”

His cousin Ryan Mack, who lived in Kauai, Hawaii, ran a hang-glider operation. He told Ware that being in the sky was like forcing your mind completely into the present moment. Nothing, not even the persistent memories of an ex-partner, could invade. “I was immediately into it,” Ware said. “I immediately felt better. That’s why I call my business ‘air therapy.’”

Ware’s father was a pilot and taught his son the basics of flying in Southeastern California’s Mojave Desert. When Ware was still young, his parents relocated to the Rocky Mountains. Over the next decade, they rotated through a few small towns before settling in Bigfork. By then, Ware had left home and trained to become a licensed massage therapist at the California Institute of the Natural Healing Arts. He opened his own practice in Beverly Hills, and also worked at a Marriott Flagship Spa. 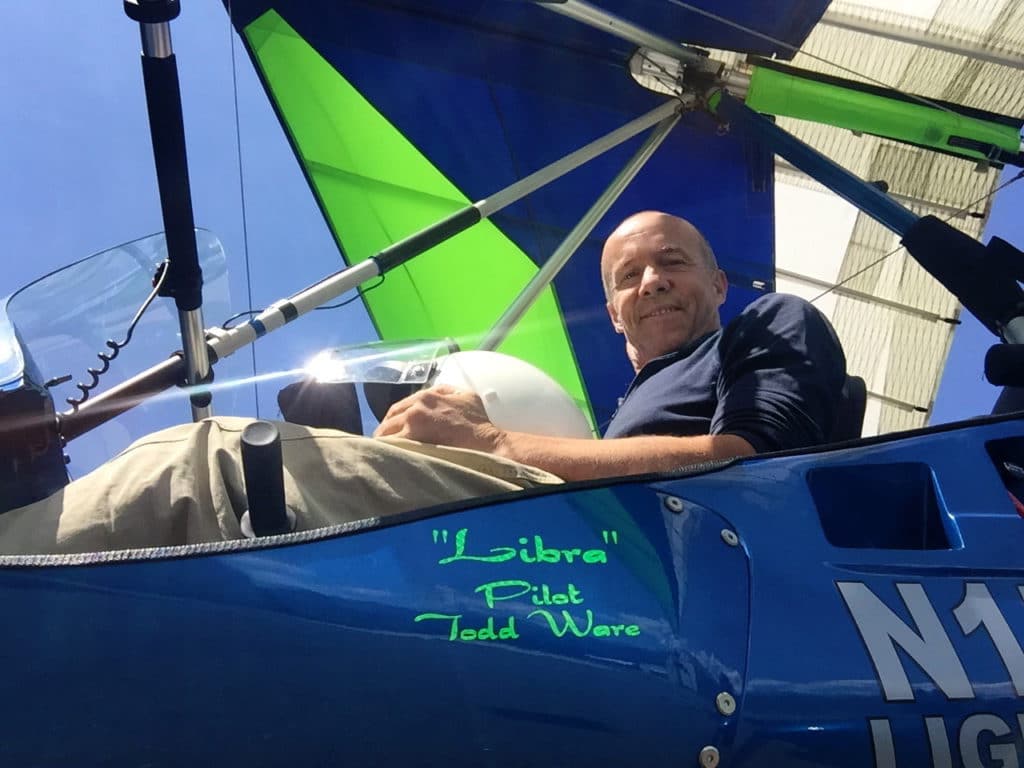 About 10 years ago, Ware moved back to Northwest Montana to help his father manage the property near Flathead Lake. He first opened up a massage private practice in Bigfork. Then in 2010, he earned his flight instructor certification and got his aircraft, which he describes as “the closest you will ever get to flying on a dragon.”

Riding in this open-cockpit, 100-horsepower aircraft is a “full body experience,” Ware said. “It’s beautiful: You feel the wind on your face and you can smell the fields and the pine trees when you go low.”

“It had worked so well for me as therapy,” he continued, “that, from the very beginning, I had a thought that this would be good for veterans, for guys coming home with Post-Traumatic Stress Disorder.” Through Air Aviation Therapy, he offers a 34 percent discount for veterans because, as his website says, “Flying is healing. The sky reaches out and touches you.” Local veterans were his first repeat customers.

Since opening shop in 2015, the business has grown consistently, Ware says. He completes some 250 flights a season, spring through fall, with a capacity to operate up to eight flights a day. Flight sessions, which he calls lessons, run for approximately 30 minutes. Ware pilots between 20 and 1,500 feet above the ground, at speeds up to 90 mph, and usually lets customers take hold of the control bar at some point during the flight. A lot of people tell their friends about the experience. “The word-of-mouth in the Flathead is wonderful,” Ware said. Many of his first-time customers have also seen the aircraft from the ground.

Rick Ward, a retiree who lives in East Many Lakes, first spotted it from The Raven at Woods Bay. He waved from his docked pontoon boat, and immediately set his mind to getting up there with Ware. During a 20-year-long sales career, Ward often traveled on commercial airlines. But even the feeling of a small passenger plane doesn’t compare to the Apollo Monsoon, he said.

He encouraged his wife Linda to fly with Air Therapy Aviation too. She was hesitant, but afterward, she couldn’t stop talking about the flight. Ware often flies with folks who dislike heights. He said that some of his best trips have been with customers who are the most apprehensive or afraid.

“They’re the most scared taxiing, but once we take off, that turns into euphoria,” he said. “By the time they land, they have such a sense of overcoming their fears, and that turns into a real peacefulness.” 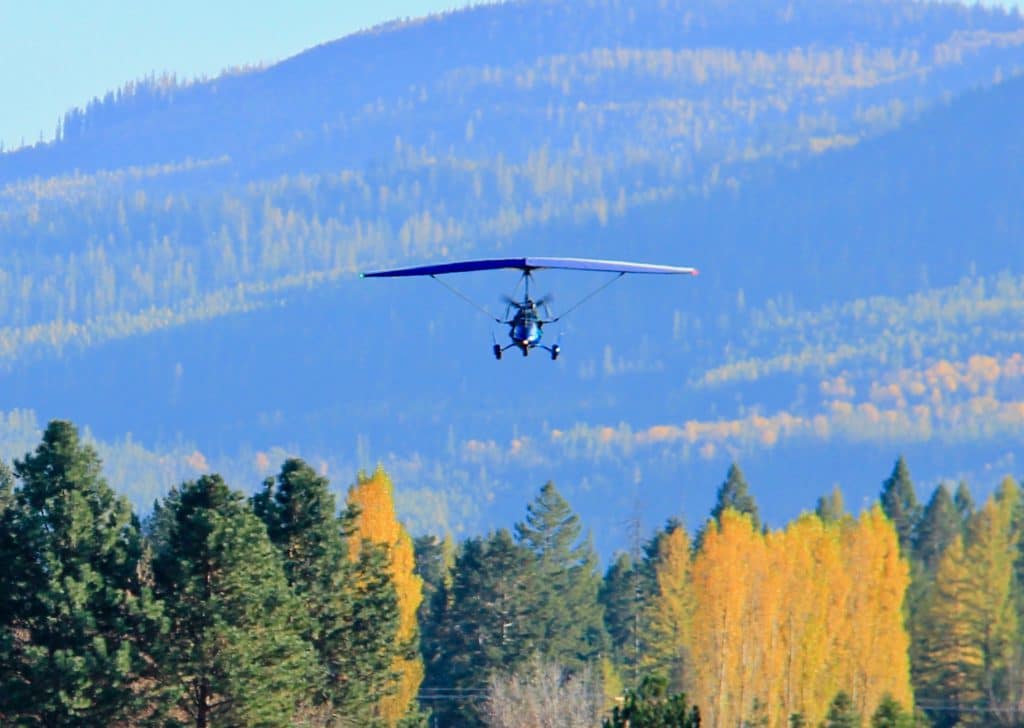 Elizabeth Vandeberg, a Bigfork-based web developer, said she was “honestly intimidated and had no interest in going up.” But she knew Ware personally, and after seeing him fly over town so many times, she decided try it. He made her feel calm and safe, she said. Ware is an internationally recognized pilot, having competed in the 2015 Dubai World Air Games for the United States. At press time, he was ranked 12th in the world in his aircraft category – a credential, he noted, that puts people like Vandeberg at ease.

“It was a beautiful day; the sun was shining. I will say, the most impressive thing, besides the initial takeoff, was the feeling in your stomach of elevating up,” she said. “We were flying over a field, and there were geese flying below us. It was amazing, just being able to get that low to the ground and feel like you’re soaring with the birds.”

She reveled in the perspective gained from this new vantage point. “You see how much water is in the area – you don’t really realize how many dots and lakes there are,” she said. “Seeing the area in relation to Glacier National Park and the rest of Northwest Montana, you see how small we really are.”

Vandeberg was surprised about how much she enjoyed flying. She felt like the experience had prompted her to “go with the flow and find calm.” But, until she watched footage from the trip, she hadn’t realized she had been grinning the entire time.

“It’s a feeling of joy,” she said. “You get back down on the ground and you’re like, when can I go again?”

Clare Menzel is a Montana transplant originally hailing from the East Coast. She’s in the process of starting her own local business, a West Glacier pick-up and drop-off wash-and-fold laundry service called Going to the Suds.