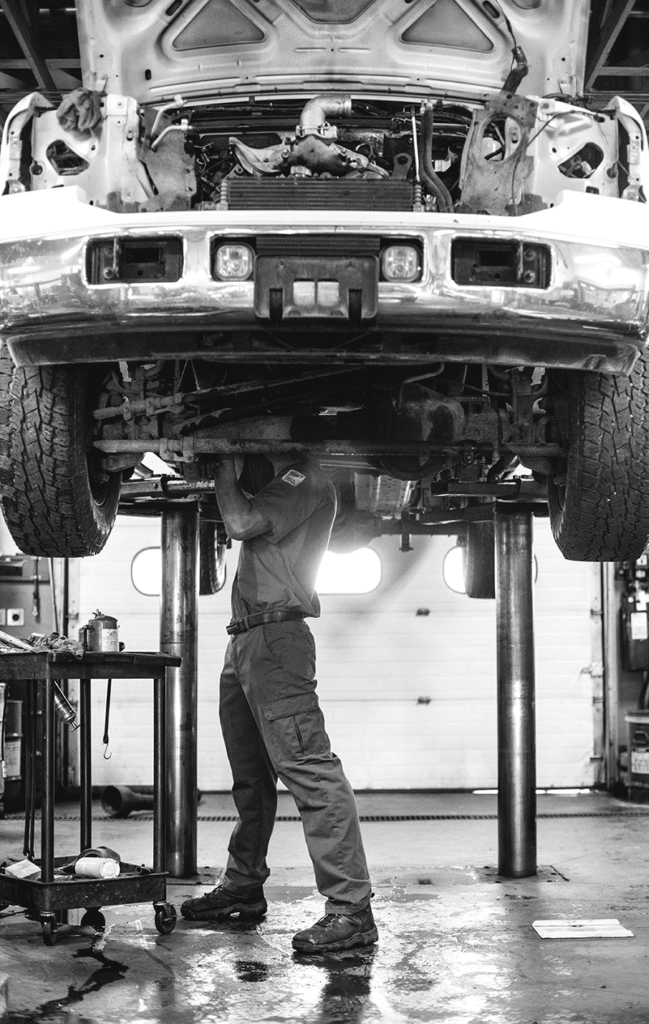 Travis Sallee was raised in the auto repair industry, but he never became a mechanic. His mother urged him not to, after seeing her husband labor in the business. “She kind of drilled that into my mind,” Travis explains. “Then I had a dad who was good at fixing things, and he always fixed everything I had. So, I didn’t grow up fixing a lot of cars.”

Even so, as the general manager of one of the highest rated auto repair shops in the valley, Travis knows this business inside and out. Travis’ parents, Loren and Denise Sallee, founded Loren’s Auto Repair in Kalispell in 1985. Travis grew up in the shop pushing brooms, washing cars, and changing oil, but never followed in his father’s vocational footsteps – an ASE Master certified auto technician with over 40 years of professional industry experience.

Instead, Travis moved away for college, where he met his wife and received degrees in accounting and information technology. In late 2010, his parents asked if he’d be willing to come back and help with the business. They were nearing retirement and it was the middle of the recession, so times were tough. Travis moved with his family back to his hometown and took over the day-to-day business operations, which he’s been running ever since.

Six years later, Loren’s Auto is thriving. Travis attributes this success to the level of care and open communication they provide for their customers. “We put them in the best place that they can be in to make the best decisions for their car.”

Customers can expect routine updates and detailed explanations of the work that was done on their vehicle. An inspection report follows every routine maintenance service so customers know how their car is operating. Upselling is not part of it, Travis explains – “We don’t take a hard sales approach; we don’t try to scare people.” They work hard to return the car to the customer as quickly as possible. Plus, they wash your car for you, weather permitting.

While Travis is still not a mechanic, Loren’s employs five auto technicians, four of which are ASE Master certified – the highest level of certification for the auto repair industry. While it’s been a challenge to find employees that are committed to the auto industry as a career, Loren’s has nevertheless succeeded – two of their techs have been there over 16 years, and another two for over five years. The fifth is a new hire, because the business is growing.

Travis tells me, “I think we’ve done a good job finding employees that care about the same things we care about, and I think that’s powerful. But our customers don’t necessarily talk to our techs directly, and I would guess that the average customer doesn’t know how much they really do care.”

Some customers must be taking note, however, as there were three banners from Best of the Flathead waiting to be hung in the office when I visited – two of Loren’s technicians won for Individual Mechanic. Loren’s also took home the number one spot for non-dealer auto repair.

As a local business, Loren’s donates services to many fundraisers for non-profit organizations across the valley. Travis and his wife serve on numerous non-profit boards and volunteer groups. And in 2014, they established the Wheels to Thrive program as a way for Loren’s to give back to the community they love.

Wheels to Thrive candidates are nominated by the public, and winners receive a refurbished vehicle donated by Loren’s. “We try to give the cars to people who are trying to make our world a better place, because that’s what’s going to keep on giving,” Travis explains. “If we can give that person a vehicle to allow them to keep doing what they’re doing, that’s where we can have a bigger impact.” The program has already donated two cars, and they plan to give more whenever they can.

While the auto industry has changed considerably since Loren first opened the shop, providing service with integrity is still the main priority for the business. The best part for Travis is, “helping people. People bring us their problems, and we fix them and make their lives better. A lot of people don’t understand cars, so establishing that relationship where they trust us to take care of them, that means a lot. Someone will come here and their life is disrupted and we can help put it back together. That’s rewarding.”